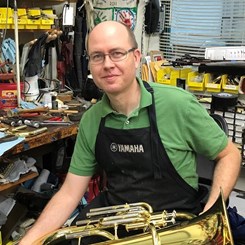 Get to know Aaron K

A performer on many instruments, Mr. Aaron Kinman is a former student of the University of Louisville School of Music, and is sought after as an instrument repair technician and musician in the greater Louisville Metro area.

Initially an apprentice under Miles Davis, Aaron has gone on to become a master in the field of instrument repair. As an instrument repair technician he has done work on the instrument of jazz greats like Slide Hampton, Eric Alexander, Buddy Morrow, Delfeayo Marsalis just to name a few. his accomplishments are numerous. He repairs and maintains instruments from schools, universities, including University of Louisville and University of Kentucky. and military around the country. Mr. Kinman is in demand as a freelance soloist and ensemble performer. Aaron appears regularly with many different ensembles in churches, weddings, big bands, show bands, studio work and orchestras such as the Louisville Orchestra, including several performances at the Blue Note Jazz Club in New York City.

He is happily married with four children.