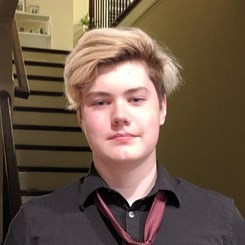 Get to know Aidan M

Hey! My name is Aidan and I am a sophomore at the University of Miami in Florida. I was born in New York and moved here when I was eight, and soon after began playing music. In sixth grade I auditioned to play the tuba in my band and fell in love with it. I then went on to play in the all-district honors band twice and also began playing jazz and expanding my musical abilities. I have also marched in my high school's marching band for 3 years. and have been the Drum Major for one year. I have also marched in the university's marching band and played in the pep band with the basketball teams and am currently the tuba section leader. I currently play tuba, trombone, trumpet, piano, and am knowledgeable about music theory. I would love to meet you, so stop in sometime!
Aidan M works at:
Durham NC
3603 Witherspoon Blvd Suite 112
Durham, NC 27707
(919) 402-9270
Get Directions More Details
Skip link