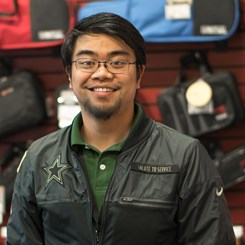 Get to know Alvin E

Alvin Eclavea is a graduate of Stephen F. Austin State University with his Bachelors' and Masters' Degree in Music and Music Performance in Saxophone, respectively. During his time at SFASU, Alvin performed in the top ensembles including Wind Ensemble, The Swingin' Axes, Saxophone Quartets, and Orchestra of the Pines. He was also Drum Major for the Lumberjack Marching Band (2008). In 2009, Alvin was a baritone player for the Bluecoats Drum & Bugle Corps from Canton Ohio.

He currently resides in Watauga, TX where he is an active performer, educator, and clinician. He has 15+ years of private lesson experience all around Texas including schools in East Texas, Killeen-Harker Heights, and the DFW area; where he's had several All-State students, soloists, and ensembles. Alvin is also a photographer, husband, and father.