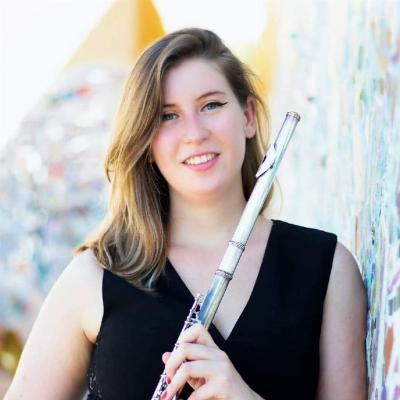 Get to know Anna Murphy

Anna Murphy is a versatile and dedicated flautist with experience in orchestral, small ensemble and solo performance as well as a passion for teaching.

She was born in Belgium to a French mother and Irish father and started the flute at the age of ten in her town’s local music school, where she eventually won the flute prize at the age of seventeen. In September 2012, Anna started at Chetham’s School of Music in Manchester where she studied for two years with Laura Jellicoe. In 2014 she went on to study at the Royal Northern College of Music under the tuition of Laura Jellicoe, Kevin Gowland and Susan Milan; eventually graduating with a First Class Honours Bachelor of Music. In 2019, Anna started at the University of Arizona (Fred Fox School of Music) under Dr. Brian Luce's tuition and as a Teacher's Assistant and member of the Fred Fox Graduate Wind Quintet where she recently graduated in May 2021 with a Master's of Music in Performance.

Throughout her musical education and development, Anna has had opportunities to play to many renowned flautists from around Europe and the United States such as Samuel Coles, Michael Cox, William Bennett, Julien Beaudiment, Robert Winn, Michael Hasel and Karl Kraber. She has also won some awards as a soloist and chamber performer such as the Help Musicians UK Supported Artist Postgraduate award in 2019.

Anna Murphy works at:
East Tucson AZ
9630 E 22nd St Suite 130
Tucson, AZ 85748
(520) 731-8229
Get Directions More Details
Skip link
With over 150 locations nationwide, Music & Arts is the nation’s leading provider of private music lessons, band and orchestra instrument sales, rentals and repairs. Our remarkable story of growth has everything to do with the countless unshakable relationships we’ve formed with students, parents, music educators and musicians of every stripe in the local communities we serve across the country. Since opening our first store back in 1952, we’ve been owned and operated by the same family, and there’s nothing we do as a company without our values in mind. For whatever you’re doing in music, we’re here to help. We hope you visit our Tucson location soon! Our friendly staff can’t wait to meet you.