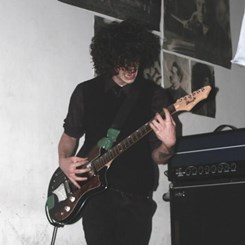 Get to know Ashtin A

Howdy! My name is Ash, and I am a part-time Senior Sales Associate at the Riverside location.

I took up the pots and pans as soon as I could grip a wooden spoon, but my performing history began at age eight, with classical piano training. In elementary school I tried the clarinet and trumpet, but in middle school began my deep love for the electric guitar. During my high school years, I took private lessons in jazz and rock while playing around the Inland Empire in a heavy metal band with some classmates .

Upon graduating, I formed a more serious band called Apathean, and released two records. Touring and gigging heavily in the southern CA and west coast "underground DIY" music scene for about three years, has greatly informed my knowledge of networking, live performance, and management. The years since the formation of that band have seen my adoption of the drum kit and bass guitar. As of now, I play the fretless bass guitar in an R&B group called Orvega, and a newly-formed post-rock group called Heirloom.

Though my greatest passion is composing and performing music, not far behind is my love for the technical aspect of electric instruments, amplifiers, speakers, and effects units. I have been modifying my equipment for the past eight years, but in 2014 I went to Guitar Craft Academy to earn my Certificate of Luthiery and Guitar Maintenance. I intend to further my education in this field, by continuing to build and modify more devices with the goal of designing and manufacturing my own instrument amplifiers and effects. Always Stay Learning!!

I love researching and conversing about musical gear, and I pride myself on my knowledge when it comes to the technical and practical aspects of guitar and bass equipment; However, I am eager to grow my knowledge into the band & orchestra field, and eager to facilitate the most important service we offer, which is helping people to learn and play music! So call us up or come on in, and I would love to help you get to where you're going.