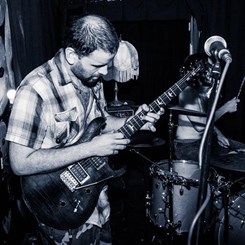 Get to know Christian S

Greetings! My name is Christian and I am the Store Manager here at Deer Park!

I attended Lindenhurst High School from 2005-2009 and also went to Nassau Community College to study Studio Recording Technology. Throughout my years in high school I participated in every music program I could get involved in. I was involved in numerous performance groups such as the Concert Choir, Jazz Band, Pit Orchestra and Marching Band groups. I have been playing guitar for 20 years and have been singing since I could speak. When I first started, I took lessons in Music and Arts for about 4 years and then continued on my own. I play in a touring progressive/math rock band called Wait and Shackle and also play in the band Karma Versa. Aside from playing in those bands, I also produce my own solo music and do freelance mixing/engineering with just about every genre of artist. If you have any questions concerning gear, recording, or anything music related feel free to come in the store and ask me anything!