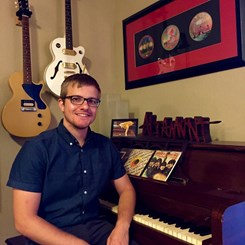 Get to know Christian W

Just like essentially everyone else that has the pleasure of working at Music & Arts, I have been interested in music since a very young age. My brother bought me a little 61-key keyboard for Christmas when I was in elementary school. From that moment on, my entire life has been focused on music. I immediately started teaching myself songs by listening and playing along to the radio. Once I obtained a basic understanding of chords and progressions, I started writing my own songs. They started off as instrumentals only, but as I got older I began to write words to accompany the music. Looking back, they weren't the greatest of compositions, but they helped develop me into the producer and songwriter that I am today.

I moved to Orlando to study Entertainment Business at Full Sail University. My goal was to become incredibly knowledgeable about the behind-the-scenes aspects of the music industry. On top of what I was being taught in school, I started studying what was currently popular in all major genres of music and who was responsible for its' creation. I discovered which producers/songwriters were currently succeeding with their music and these individuals became the inspiration behind my own songs.

I was fortunate enough to meet a successful production duo in Orlando that I began working closely with. Through this connection, I got the opportunity to have my productions heard by major labels such as Atlantic Records and Warner Music Records. In 2013, I co-produced a song for Grammy-nominated artists Sultan + Ned Shepard entitled "All These Roads". The track also features Sam Martin, writer of Maroon 5's hit song "Daylight", and Zella Day. The song was released under Atlantic Records in October and has so far garnered the attention of BBC Radio, Billboard Magazine, Dr. Luke, David Guetta, and Tiesto. In 2015, I landed my second major label song placement with "Running Wild" by Morgan Page feat. The Oddictions & Britt Daley. The song is featured on Page's latest album "DC To Light" and has since been released as the album's second single. In April of 2016, the song reached #1 on the Mediabase Dance Airplay Chart and peaked at #3 on the Billboard Dance/ Mix Show Airplay Chart.

I've worked at Music & Arts for over three and a half years now. The atmosphere at the store is amazing. All of our lesson instructors are absolute professionals and have plenty of experience to show for it. Our employees are friendly and well informed about the products/services we offer. Describing our store through text truly doesn't do it any justice, though. Feel free to browse through the photos of the store or, better yet, come in and experience the excitement in person! We look forward to seeing you.