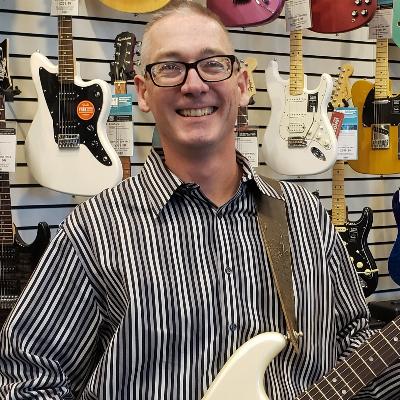 Get to know Darrell Monk

Age 46, born in Fort Worth, Texas and instantly fell in love with everything musical. Started playing guitar at the age of 14 and quickly started his first band by the age of 16. He has played in numerous bands since then and learned to perform on different instruments along the way including vocals, electric and acoustic guitar, bass guitar, and drums. He has performed studio session work on some local albums in the 1990's. He has also recorded three independent albums. He is currently working on his first solo album.

In the spring of 2001 he graduated from Roberto-Venn School of Luthiery in Phoenix, Arizona and started building and repairing guitars. Some of his past work involved setting up guitars for popular band members in groups such as Megadeth, Anthrax, and Toby Keith just to name a few. He is currently working on digital recording/producing and studying Jazz, Blues, and Theory for guitar...and also loving his job at Music and Arts!

Darrell Monk works at:
Mansfield TX
121 West Debbie Ln Suite 105
Mansfield, TX 76063
(817) 473-1964
Get Directions More Details
Skip link
With over 150 locations nationwide, Music & Arts is the nation’s leading provider of private music lessons, band and orchestra instrument sales, rentals and repairs. Our remarkable story of growth has everything to do with the countless unshakable relationships we’ve formed with students, parents, music educators and musicians of every stripe in the local communities we serve across the country. Since opening our first store back in 1952, we’ve been owned and operated by the same family, and there’s nothing we do as a company without our values in mind. For whatever you’re doing in music, we’re here to help. We hope you visit our Mansfield location soon! Our friendly staff can’t wait to meet you.