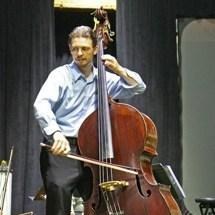 Get to know Eric P

Composer and Bassist, Eric J. Polenik, began composing music and learning to play the Double Bass at age 16 after hearing Beethoven for the first time.  His music is influenced by jazz harmonies and dance rhythms as well as a sense of time and place.  In 2013 Polenik had three premieres presented by the ensemble Gibbs and Main.  The first being "Winter Crickets", a piece based on Rochester's Mt. Hope Cemetery.  In May of 2014 Gibbs and Main will be premiering Polenik's latest string quintet entitled "Night Beats", which draws on techno, R&B, Motown, polka, love, and weddings as its inspiration.

As a bassist, Polenik has been a member of the Rochester Philharmonic Orchestra since 2006 and in 2011 joined the group Gibbs and Main.  Polenik can be heard on Gibbs and Main's CD Terra Nova (available on iTunes) and has performed and been interviewed on Rochester's classical music radio station WXXI.  As a proponent of new music Polenik has premiered dozens of new compositions including being part of 9 premieres in 2012 alone.

Polenik has a Master in Music degree from the Eastman School of Music where he studied with James VanDemark and Robert Zimmerman, the former Principal Bassist of the RPO.  Polenik received his Bachelor in Music from Duquesne University studying with Jeffrey Turner and composition with David Stock and David Cutler.