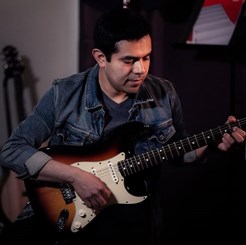 Get to know Felipe G

Felipe Guerrero has been studying music since the age of 13. His journey began when he was flipping through TV channels and he landed on Vh1 Music and saw a rock music video for the first time. It was then that he knew that he was meant to make music. His musical education began at a music school located in Dallas named, Academia Musical Valero. Unfortunately, his family was in a tough financial situation and he had to stop music lessons. However, this did not discourage Felipe as he began studying guitar with whatever he could get his hands on. He would make frequent trips to the local Guitar Center and buy as many self teaching books as he could. Over time his skill as a guitar player grew and as he got older he was able to continue his education at Collin College. It was here that he studied, music theory, classical guitar and he learned all about music production through Collin's excellent audio engineering program. Felipe is currently an active songwriter, music producer, and performer. He loves inspiring people of all ages to play music and loves helping people to develop their passion and talent for music.