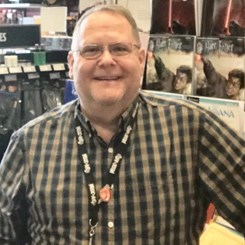 Get to know Gregory N Britt

I'm a proud native of the Commonwealth of Kentucky now living in Texas. I grew up an hour north of Nashville, Tennessee, but on the Kentucky side, southeast of Bowling Green in Scottsville. My mother worked in banking and my father worked for the Kentucky Revenue Cabinet. I have siblings, great aunts, aunts, uncles, cousins, nieces, nephews, great nieces and a great nephews that live there still.

I've performed many roles in musical theater, opera, oratorio, etc. including Tamino, the lead role in "The Magic Flute", Tiger Brown in "The Three Penny Opera",  Jenik in "The Bartered Bride", Nathan in the musical "Shenandoah", "Saint Nicholas" in Benjamin Britten's oratorio "Saint Nicholas", and Tenor arias from "Messiah" among others. I'm comfortable performing various genre with choirs, solos and small ensembles.

In college I was a member of Phi Mu Alpha Sinfonia fraternity. I have a Bachelors of Music Education and a Master of Arts in Education with a major in Music and a minor in Secondary Education both from Western Kentucky University. I've directed church choirs for several years.

I have more than 25 years of teaching experience (elementary & vocal) K-12, as well as a church music director. I have a level 1 Orff-Schulwerk certification and levels 1, 2 & 3 Kodaly certification. I also have an English as a Second Language Certification, Supplemental,  (PK-12) as well as being a participant in the National Writing Project. I have been certified to teach cultural diversity to other school employees by the Southern Poverty Law Center.