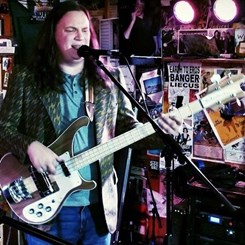 Get to know Jonathon Compton

Jon began his career in music as a precussionist in his middle school band, picking up the bass guitar soon after.  He marched snare drum through middle and high school, along with playing bass in the jazz band.

As an adult Jon has played extensivley throughout West Virginia and the surrounding region with various rock/blues/soul/funk bands such as Jabberwocky, Mojomatic, Grooveanaut, The Amos Steele Co., and Beggars Clan.