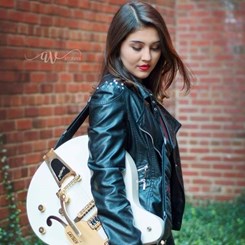 Get to know Naila Alvarez

Naila Alvarez is a jazz guitarist who got her start playing in churches in Fayetteville, NC. She began playing guitar at the age 7, and has not put it down since. Her first consistent gig was being a part of a worship team at a church in Fayetteville, and she was there for seven years, from the age of 11 to 18. She also led a youth band for four years. During this time she recorded her first single on both bass and guitar, and had the opportunity to record on multiple albums.In 2016 Naila joined a touring worship team, Marked Music, and has since traveled up and down the east coast to places such as: Maryland, South Carolina, and Boston.She currently holds a Bachelor's degree from Fayetteville State University, and is pursuing her Master's in Music Business from Berklee College of Music. She is also certified in General Music Studies from Berklee.

When not at M&A, Naila enjoys traveling and relaxing on the beach.