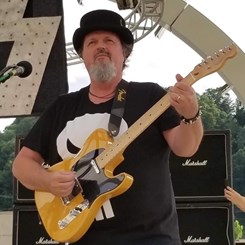 Get to know Randal Crouser

Randy began his music career on the string bass in the school orchestra which included three years in the All State Orchestra. String bass lead to him playing the electric bass and the electric guitar. Randy was also in marching band where he played brass instruments including baritone horn, trumpet, and French horn.

At the young age of 16 Randy joined his first professional group, The Bailey Singers,  where he saw himself traveling the east coast the summer before his senior year of high school learning "the ropes" of the live music business.

Randy has spent most of his career in the Charleston area where he has been the leader of several local favorite groups including Sleeper, Joe Dirty and the Salesmen, Panama Rose, and Non-Friction. Randy has also done stints in popular local groups The Esquires, Santa Cruz, Toothless Ruth, River Jam, The Audio Outlaws, and more.