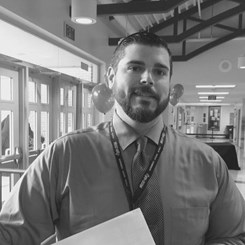 Get to know Steve P

Hello!  My name is Steve and I'm the store manager here at the Crofton, Maryland Music & Arts.

From the moment I was born, my whole life has revolved around music.  For me, music has always been a way of life.  Both of my parents are professional musicians, who actually met each other at Peabody Conservatory of Music right here in Baltimore!  Now, my mother is a retired music teacher, and my father is a percussionist in the Naval Academy Band in Annapolis, MD.  Their support of music in my life has very much shaped me into the musical advocate that I am today.

For my 6th birthday, my dad gathered a number of his co-workers from the Naval Academy Band to come to our house where he organized a parade for me and all of my friends.  Having the opportunity to march down the street with the band and play the bass drum was probably the coolest thing I could imagine as a 6 year old.  I can't be positive, but I think this may have been one of the first times I knew that I wanted to be a musician when I grew up.

After playing drums for a few years, I picked up the trombone in the 4th grade and that has been my main instrument ever since.  Private trombone lessons soon followed, and those lessons continued locally until I graduated high school and left for Oberlin College's Conservatory of Music where I studied Trombone Performance.

Then, after college, finding a job pertaining to trombone was proving to be more difficult than I had thought.  In the fall of 2005, I was fortunate enough to find a position working with Music & Arts in Severna Park, MD.  I began as a seasonal employee for back-to-school, and was kept on staff after that initial season.  The majority of my time with Music & Arts has been spent in our Severna Park location, with a few shorter stays in some of our other stores including Laurel, Ellicott City, Rockville and Bowie.  In 2011, I became the manager of our Bowie location, where I stayed for one year until I was asked to take over the manager position in Timonium.  After three years of working in Timonium, I transfered once again to become the new manager of our Bel Air, MD location. I am very excited to be back in Anne Arundel County now, serving the Crofton/Gambrills area.

It is my hope that my musical knowledge and experiences will help me to give you the opportunity to be the best musician you can be!