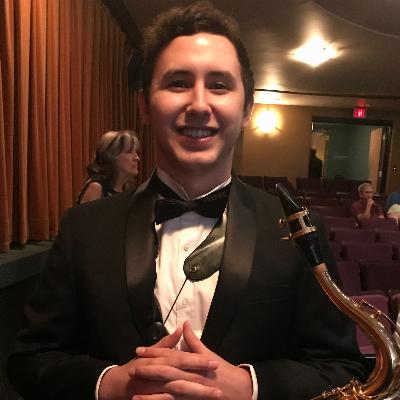 Get to know Steven

During high school I was interested in band and saxophone, but not sold on it until I was shown what this music truly represents. During a walk to my bus freshman year, I noticed my band teacher with his back against the wall and saxophone in hand. He started playing these long, beautiful lines and that felt like someone had been speaking to me for hours on end, and he never stopped to look around or wonder what the hundreds of young kids thought about his music. His devotion to this sound is what music has come to represent for me, and from that moment on, I was sold.

I began teaching when I was asked to return to my high school after leaving for college to help keep the band program running after the director unexpectedly quit. I was tasked with directing concert band, jazz band, and marching band on my own following my own curriculum the entire time. During this time I was forced to find ways not only to convey information to 100+ students, but I had to find a way to connect with students I was only a few years older than and gain their trust and respect as an instructor.

Steven works at:
East Tucson AZ
9630 E 22nd St Suite 130
Tucson, AZ 85748
(520) 731-8229
Get Directions More Details
Skip link
With over 150 locations nationwide, Music & Arts is the nation’s leading provider of private music lessons, band and orchestra instrument sales, rentals and repairs. Our remarkable story of growth has everything to do with the countless unshakable relationships we’ve formed with students, parents, music educators and musicians of every stripe in the local communities we serve across the country. Since opening our first store back in 1952, we’ve been owned and operated by the same family, and there’s nothing we do as a company without our values in mind. For whatever you’re doing in music, we’re here to help. We hope you visit our Tucson location soon! Our friendly staff can’t wait to meet you.