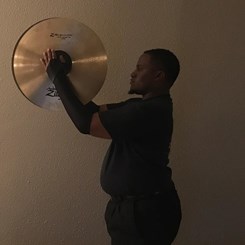 Get to know Travis C

I am orignally from Lafayette Louisiana, born and raised under a family of great music. I first started off playing on an 8 peice drum set in my church band. Played between ages 8 all the way to age 12. Soon after I was aways entertained by music and performed in small a band, until i got into Middle school. Where i was introduce to playing the Alto Saxophone. I carried over renting the school's Saxophone until age 15 when my dad and mom bought me a beginners sax, in which i carried and played in High School with. At the same time while in High school i march Saxophone and played Percussion in the Pit and March Cymbals. I got a chance in 2012 to audition for the Macy's Great American Marching Band after seeing the 2011 Macy's Thanksgiving Day Parade. I was accepted and march with them in 2012. Soon after in college i played with the Baton Rouge Community College Jazz Ensemble and had the chance to perform with Former Director of the Tonight Show band Branford Marsals which was a big honor. Not only that got the chance to meet Former Director of Southern University Human Jukebox Marching Band Eric Baskins. So I got to met a lot of people in my life and the music passion is end less. Music can only take you so far but to me its worth the effort put in to make things happen.
Travis C works at:
Webster TX
19335 Gulf Freeway Suite 10
Webster, TX 77598
(281) 316-1724
Get Directions More Details
Skip link