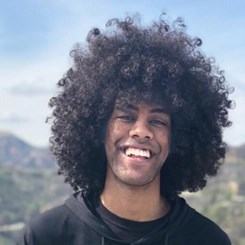 Get to know Vincent Gregory

Hi, my name’s Vincent. My musical journey began in 6th grade when I started playing the euphonium over at Connally middle school. I didn’t like playing euphonium or baritone at first because I was so dead set on playing the sax or the trumpet, but after giving it some thought, and a stern talking to from my dad; I decided to continue playing the instrument. I played the euphonium all through middle school and continued to play when I moved up to the high school level over at John Marshall high school. I marched all four years of high schoo marching band, I was the head low brass section leader my junior and senior year and was involved in region band, featured as a euphonium soloist in region orchestra, and also went to the state level in the UIL solo and ensemble contest.

Rest assured I’m not just a one trick pony. I picked up the guitar my 7th grade year of middle school after hearing the guitar part to a song my sister was listening to and thinking: “That’s so cool I want to learn that!!”  I’ve been playing for a little over seven years now but I still consider myself a student. I’ve also been playing the piano for a little over a year now. I’m a music technology major over at Northwest Vista community college and it’s a requirement for my degree but I’ve always wanted to learn how to play the piano so it worked out perfectly. Outside of playing those three instruments, I’m also a local DJ that goes by the name of DJ Bumaye. I’ve done weddings, homecoming dances, graduation parties, and quinces.

I really enjoy helping people find their first instrument, discussing music lessons with them, and helping them with instrument rentals.