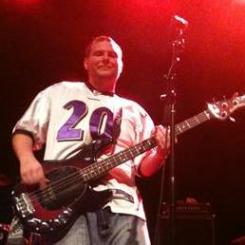 As we kick off guitar month I can't help but think about my experience playing bass and guitar. I started off bright eyes and bushy tailed when I was 16. I went out and bought my first bass and started plucking away at the strings with no real idea of what I was doing but I loved every second of it. Once I finally got some instruction and started making progress I got together with a few friends and before long the high school garage band was born. We attempted to play some of our favorite songs as well as writing our own originals filled with all the angst you would expect from teenagers.

Time kept moving forward and the band broke up as we went to different colleges across the country. I found that while my other band mates enjoyed playing as a hobby, I could not stop thinking about playing. I would find myself up at 2:30 with my headphones plugged into the amp playing and practicing until my eyes would not stay open. It was during this time I had a realization that I wanted to see how far I could take this. I saved up some money and upgraded my bass and amp. It was about this time I purchased my first acoustic guitar as well. I kept moving forward, and practicing, and getting better, and pushing.

At this point I was 18 and had not played with anyone in over a year. I had grown by leaps and bounds but really had no way to show or express myself. Finally one day I tagged along with my parents to a cookout at a friend of theirs. Coincidentally one of the attendees was a local drummer who had a band that had been playing together in the area for about 10 years. They had just lost their bass player who moved out of state. I was so excited for the chance to play again. I showed up at their practice space and quickly realized I had moved into the next stage of my music career. They had professional audio set ups with mixing boards, massive speakers and amps, and custom prints on the drum set and electric guitars to market the band. The group of guys had been playing together almost as long as I had been alive. It was very intimidating, but I did not let the nerves get the best of me as I tried to keep up with them as they played. I squeeked by the audition and after they offered me the gig I went to work on learning their catalog of original songs but mostly covers that was around 175 songs. The next two years was quite the blur. I went from a band playing on junk gear in a bassment for no one, to playing out at venues two nights a week as well as two nights of practice. I had so much fun with this group and they really showed me what it meant to be a working musician. The dedication, patience, and hard work that you put in will come to fruition. Unfortunately, the group would eventually disband (as most do). One of the members had some health problems and was not able to continue and we did not feel comfortable carrying on the name without him.

Again, I found myself alone but not phased. I kept working, harder, and smarter than I ever had. after about a year of solo work I recieved another opportunity to play bass for another band. This local band focused heavily on originals and creativity which was a road  I was ready to go down. This time around I was not the new inexperienced player I had been in the past. This time I came in with ideas and plans on how to take this to the next level. We put months of work into our practice space (a rental storage locker. Beggars can't be choosers). Eventually we started performing in the area. Headlining such venues as Recher Theater in Towson, and Rams Head Live in Baltimore. We released a CD and opened for a few national acts as they passed through. The years would pass and before long it was time for band to split up (as they always do).

I had every opportunity to put down the guitar but I would not do it. I started picking up my acoustic and playing covers for fun. Writing a song here or there but really just loving being a musician. I hooked up with a friend of mine who also played acoustic and we found ourselves playing and having fun at cookouts and bonfires. We would play a couple of open mics or friends parties but nothing major came of this, however, it never stopped being fun. It was during these years I was fortunate enough to find work with Music & Arts and could share my love of music with many other people and beginners.

As I reflect on the path that brought me to where I am today I just want to offer a small bit of advice or wisdom to anyone playing or thinking about playing guitar. There is no way to know where music will take you. People often start the same way in that they love music and want to be a part of it. As long as you are willing to put in the work, you will see everything that you want to see in this world, and every day is an opportunity to be better than the last. You dont have to become a rockstar to feel like one. Keep playing and it will all work out fine.