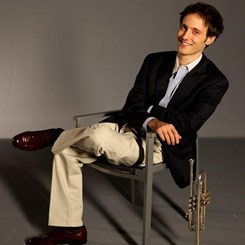 Alex Rodiek made his solo trumpet debut at age twelve and has since been a sought after performer, teacher, and clinician of the instrument. He hasperformed with music’s most notable conductors including Gerard Schwartz,
Robin Fountain, John Mauceri, and Ransom Wilson. He has performed in Master Classes for artists such as Ronald Romm, Gerard Schwartz, AlisonBalsom, Rex Richardson, Anthony Plog, and Adolph “Bud” Herseth.

Notable orchestral performances include a premier concert of American Music classics and more in China’s Tiananmen Square with the Vanderbilt Symphony Orchestra. In 2007, he was a scholarship recipient at the Eastern Music Festival.

In the 2008 – 2009 season Mr. Rodiek was a semi finalist at the National Trumpet Competition’s solo division.He was also a finalist in the 2009 University of North Carolina School of the Arts Concerto Competition. In the 2009 – 2010 season he won the position of second chair in the Western Piedmont Symphony.

Mr. Rodiek has been an active freelancer and clinician since 2004 and has performed chamber music, weddings, master classes and church services spanning throughout the Southeast Region. Currently based in Atlanta, Georgia Mr. Rodiek joined the Beltline Brass Quintet in 2011. He also holds the solo cornet chair in the Georgia Brass Band and is a regular member of the Mercury Orkestar, Atlanta’s premier Balkan Brass party band. Other notable groups include The Heather Hayes Experience, Rhythm Nation, Douglas Cameron Big Band, Bumpin’ the Mango, The Whiskey Gentry, American Aquarium, and Tierra Cali. He is also a substitute trumpet player for the Macon, Augusta, Columbus, and Dekalb Symphony orchestras.