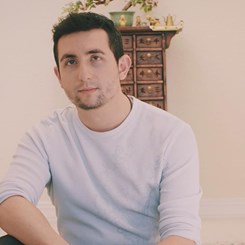 Alex discovered the joy of music at an early age, having been born into a family of musicians. After receiving classical instruction by Dallas Symphony First Chair Cellist, Alex Djinov, he began to delve into genres other than classical, and picked up numerous instruments along the way, taking guitar lessons from such names as Danny Masters and vocals from Lori Gorklo.

Since the age of 12, Alex has learned, performed, recorded, and composed music on instruments such as the cello, guitar, bass, drums, piano - as well as his voice - amassing a large repertoire of original compositions in the process. He appreciates the mysterious intricacies of classical music as much as the powerful freedom of rock and roll. With experience playing in orchestras and fronting rock bands, he is grateful for the positive impact it has had on his life as a whole.

Alex truly enjoys giving back to his community, and showing  his students what music has done for him through regimented instruction on cello, guitar, voice, bass, drums, and piano. Starting all with the cello, music has allowed him to create meaning in his life.

Although Alex is primarily a musician, he is an avid hiker, photographer, athlete, poet, gamer, and adventurer as well.

Helping others find peace, discipline, and confidence in themselves is one of his greatest passions.