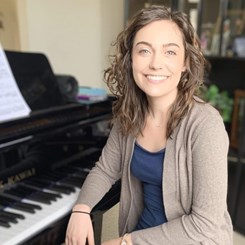 Whether it was a Queen concert DVD, a Miles Davis album, or a Tchaikovsky waltz at Christmastime, there was always music playing in the home and in the car when I was growing up, leaving me with such a wide range of musical influences. I first fell in love with creating music around the age of 2 when my parents would take me to early childhood music classes that exposed me to musical concepts through play. Outside of class, my family and I would sing rounds in the car and lullabies before bed, make up our own songs, and dance to the beat of everything we listened to.

Around the age of 10 is when I began to teach myself piano, initially learning everything by ear which assisted me well as I started to read music. At 14, I began formal private piano instruction, becoming trained in both classical as well as jazz studies. At 15, I picked up the guitar and instantly fell in love with songwriting and accompanying myself singing which led to recording my own songs. I jumped at any performance opportunity I could throughout middle school and high school, from playing on the worship team at church, to performing in musical theatre to singing in a choir.

College exposed me to new outlets of musical expression as I continued my private instruction in piano as well as classical voice lessons and private mentoring in music composition. Some of the highlights of my musical journey in college included composing and arranging a piece for a full orchestra and seeing it performed on the stage of Wentz Concert Hall as well as touring New York City with a women's choir and singing on the stage of Carnegie Hall. In addition to studying music, I also studied digital communications and gained experience in video/audio editing and recording. My two worlds of music and media collided when I interned for a music licensing company in Chicago, teaching me more about sonic branding and scoring for film and commercials.

I began working at Music & Arts in 2020, and I am so excited to help anyone embarking on their journey into music! When I'm not in the store, I teach mixed-age early childhood music classes as well as private lessons in piano, voice, and guitar. Any questions on our combo instruments or print music? Just ask me!