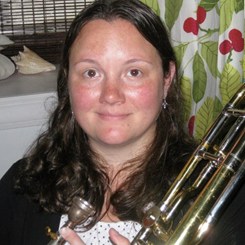 Amanda Holmes began playing trombone at the early age of eight under the guidance of her father, a gifted trombonist and instructor in his own right.  As a sophomore in high school, Ms. Holmes became the leader of her band's trombone section, a position usually reserved for senior year students.  Her early experience as an instructor while serving as section leader lead to her love of teaching.

Ms. Holmes pursued a Bachelor of Music in Trombone Performance spending her first year studying under Steven Rawlins at the HARID Conservatory in Florida.  She completed her degree at Peabody Conservatory where she studied under James Olin, and received her Bachelors of Music in Trombone Performance.  While at Peabody Conservatory, Ms. Holmes was inducted into the Golden Key Honor Society, and  performed in the Trombody Peabones, the Peabody Concert Orchestra, and the Peabody Jazz Ensemble.  After graduation, she began her continuing career as a freelance trombonist performing around the Baltimore metro area, and started to build her private lesson studio.
Ms. Holmes began teaching at Music and Arts in Ellicott City in 2005.  She teaches all the low brass instruments, and starting in fall of 2014, she will lead a brass ensemble at Patapsco Middle School.  Ms. Holmes caters to the strengths and challenges of each of her individual students and tries to share with them the joy that music has been in her life.  She welcomes students of all ages and believes that everyone needs music in their lives, and is humbled by the opportunity to share her passion with her students.