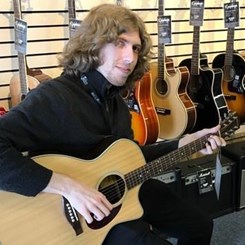 Hey everybody, my name is Andrew Barry. I have been working at Music & Arts since 2016 and I've been enjoying every minute of it. Music has been a major part of my life starting way back when I was playing violin in elementary school. From violin I moved on to the saxophone. When I turned thirteen, I moved on to my main instrument: guitar. From that point onward, I was obsessed. Playing the guitar allowed me to enroll into Berklee College of Music, which I graduated from in 2013. At Berklee I was trained in an array of topics such as music theory, counterpoint, composition, sound recording, ear training, and I took up a major in songwriting. Along with studying music, I've been writing and playing it in various bands and have also performed many solo acoustic sets.

I love to talk about anything guitar-related, especially when it comes to guitar effects/effects pedals. Along with guitar I also play bass, alto saxophone, mandolin, and harmonica.

Have any questions about guitars or guitar gear? Feel free to ask me!

Current gear I've been playing on: