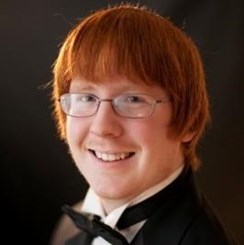 Andrew Miller, a native of Springfield, VA, is an accomplished pianist whose versatility and commitment to musicianship are exhibited by his active participation as a soloist, accompanist, chamber musician, and instructor in the Northern Virginia area. Andrew graduated from the D.M.A program in Piano Performance at George Mason University in 2018 and has had the privilege of studying with Dr. Anna Balakerskaia since 2010. His dissertation analyzed some Preludes and Fugues of J.S. Bach, Dmitri Shostakovich, and Nikolai Kapustin. During his time at GMU, Andrew was an active solo and collaborative performer, participating in more than 20 degree recitals at all levels. He was selected as a winner of the 2016 GMU Concerto Competition and performed for the Scholarship Benefit Concert with the Mason Symphony Orchestra in May of that year. Additionally, Andrew was privileged to perform Prokofiev's Piano Concerto no. 3 in C major op. 26 with the GMU orchestra in March of 2017. Andrew was a winner of the GMU Concerto Competition in 2013 and performed Gershwin’s Rhapsody in Blue in the Young Masters Concert before the completion of his Master of Music in Piano Performance (May 2013). He participated as a performer and chamber musician in the Orfeo International Music Festival held in Vipiteno, Italy (2011),

In May 2010, Andrew graduated Cum Laude with a Bachelor of Music in Piano Performance from Christopher Newport University. Under the tutelage of CNU professors, Dr. Jeffrey Brown and Dr. Amanda Halstead, Andrew won the CNU Concerto/Aria Competition twice and was given the privilege of performing Beethoven’s Third Piano Concerto and Gershwin’s Concerto in F with the Christopher Newport University Orchestra. In addition to his orchestral recognition, Andrew received first place in the annual Friends of Music Scholarship Recital and was nominated two times for the “People’s Choice” Award. He has performed various musicals for TheaterCNU including the production of Urinetown (2007) as a member of the “Pit Stop Band” and was Assistant Musical Director for their production of Little Shop of Horrors (2008). During the spring of 2009, he was chosen by the faculty and was inducted into the honorary music fraternity Pi Kappa Lambda, which recognizes students for their advanced academic and musical accomplishments. In addition to his keyboard experiences, he enjoyed playing trombone as a member, and later as a drum major (2009), of the CNU Marching Captains.

Today, Andrew maintains a private studio of 30 local students, collaborates with other musicians well as a vocal coach/accompanist for GMU private studios, and plays weekly at Virginia Hills Baptist Church since 2012. In addition to his professional coaching, Andrew has appeared as a soloist/accompanist for the concert series “Music for the Angels” at the National Swedenborgian Church in Washington D.C and was an instructor/accompanist at the Eastern Virginia School for the Performing Arts.