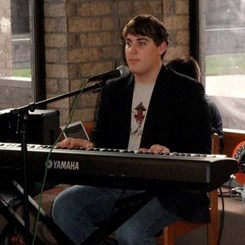 Music is language, knowledge, wisdom, therapy, arithmetic, art, and emotion. No other entity can be described as such; and no other entity, therefore, is more relevant to the human experience of both learning and teaching

Andrew Schwarz is a musician and filmmaker from Oakland, New Jersey. When he was first born, he was known as the only baby the doctors had ever encountered who "sang while being delivered." Since then on, Andrew has lived and breathed music!
At age 6, Andrew began piano lessons. By 12, he was accompanying and singing in school choruses. At 14 he started private teaching and by 16 he was arranging pieces for his high school chorus. From ages 14-16, he attended Eastern U.S. Music Camp, at which he learned advanced music theory, attained extensive performance experience, and fine tuned his knowledge and studies of the piano.
At 18, Andrew began his studies of music and film simultaneously at Hofstra University in Hempstead, New York. There he continued to teach privately, gave piano tutor sessions for the university, and attended an intensive 3 day piano pedagogy seminar by the renowned Blanche Abram of Baldwin, New York. At Hofstra, Andrew also learned to compose for film and started regularly scoring his own films as well as those of fellow students and other filmmakers. He also sang in the most exclusive chamber ensembles for his entire enrollment at the university, all conducted by David Fryling. Andrew graduated Hofstra in 2014, finishing both degrees in 4 years.
Andrew is now living back in Oakland, New Jersey, teaching private piano lessons and working on independent film production and post-production including composition. He greatly enjoys singing and is a lyric baritone. He has been singing with the New Jersey Choral Society for 2 years since graduating, in which he is a section leader, solo singer, and member of the exclusive camarata chamber chorus within the group. Additionally, in the last few years, Andrew's films have garnered over 20 awards around the world, including accolades for his original songs and compositions.
Always extremely passionate, hard-working, and dedicated, Andrew loves teaching more than anything and is extremely excited to be working for Music & Arts!