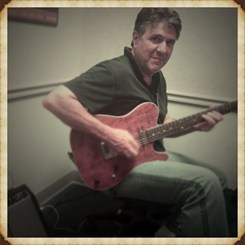 A.A. in Music from Villa Maria College of Buffalo. One Year Certification Degree from Guitar Institute of Technology. Performance experience includes starting the band “Anthrecite” and inducted into the Buffalo Music Hall of Fame.

Those who have seen Tony Scozzaro perform live, know why he has been inducted into the Buffalo Music Awards Hall of Fame. A true showman, his forceful handling of the guitar along with his quick runs and precise finger tapings are a sight to be seen.

Yet, beyond the flash is a serious musician who in 1982 was voted outstanding player of the year by faculty and students at the famed California guitar school, GIT.

"Being voted best player at GIT was the most rewarding thing in my career," said Scozzaro. "There were people from all over the world there who voted."

Scozzaro credits GFF for raising his level of playing. "'That school is really what did it for me," he said. "You play guitar there like 10- 12 hours a day. I got five years better in one year."

The hint of a musical career began at age 8, when Scozzaro got his first guitar, which he recalls as "a piece of junk acoustic with steel strings." After his parents were convinced he really was interested in playing, they bought him a Fender.

Throughout high school, Scozzaro was in a cover band, playing tunes by Jimi Hendrix, Robin Trower, Cream and Deep Purple. Following graduation, he joined the "con-conventional work force," taking roofing jobs and a position at the Ford Plant. "It wasn't long before I realized I wasn't cut out for jobs like that," he said.

He earned an associates in art degree in classical guitar from Villa Maria College and then went on to GIT.

In addition to the bands, Scozzaro gives private lessons. "I've taught some of the finest players in the area," he said. "And they've all been inspiring to me too."

Scozzaro has two releases, the 1992 solo release "No Brakes" and the 1994 Anthracite release "Psycogenic Fugue." Both were picked up by Audiofile Imports, an international distribution company.

His practice regime is simple - 2-3 hours a day of unfamiliar songs. "A lot of people sit down to practice and within a half hour they're just nodding," he said. "I try not to play things I already know."

For inspiration he listens to everything from Bach to musicians Bobby Jones and Bobby Militello. He uses a Fender Telecaster hooked up to a Roland GRI guitar synthesizer hooked to a digitech Whammy 11 pedal to a Morley volume wah-wah pedal to a Rivera tube amp.

Since 1982 Scozzaro has been success, fully supporting his family (wife Trish and son Jake) through his guitar playing.