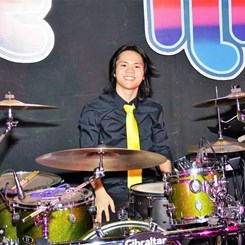 Bao Has been teaching with Music & Arts since 2018, and now has over 3 years teaching experience. Bao was inspired to become a musician and play the drums by his father, as well as many noteable Musicians including Carlos Santana, Michael Jackson, Jimi Hendrix, Pink Floyd, and Led Zeppelin.

Outside of teaching, Bao has performed all throughout the St. Louis area and Illinois with a number of different groupsincluding his band, Strange Medicine. Bao is also currently under contract performing at the Hollywood Casino in St. Louis.

Although Bao has only been teaching for a short amount of time, he specializes in teaching several different genres including pop, rock, gospel, blues, and especially latin due to his love of Santana's music. One of the things Bao enjoys most about teaching is seeing his students get better with every lesson. He thinks it is important to take music lessons because it's easier to biuld connections with the different parts of the drum set, plus you're able to fix the little details of playing that you can't learn from watching videos. His students love the fun parts of the lessons where they get to play songs of their choosing!