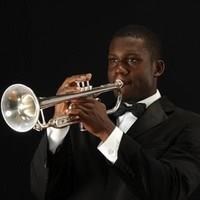 Ben Otieno began his solo trumpet debut at the age of seven years old and has since been well received as both a versatile performer and instructor. While attending the University of Georgia, Otieno studied trumpet performance under the instruction of the world’s most notable orchestral trumpet player, Philip Smith. During his time at the University of Georgia, Ben studied and performed in master classes for artist such as Chris Gekker, Dr. Brandon Craswell, Judith Saxton and Michael Tiscione.

During the 2013-2014 season, Otieno was privileged to be announced winner of the Albert F. Ligotti Trumpet Award. In 2015, Otieno was accepted as a scholarship recipient to the Easter Music Festival where he performed as assistant principle under world-class conductor Gerard Schwartz. In 2016, Otieno advanced as a semifinalist at the National Trumpet Competition.

In 2012 and 2014, Ben travelled to Kenya to lead a trumpet specific service-learning and teaching program through the Kenya Project. In 2016, Otieno traveled to Panama, via the David School of the Arts, to conduct trumpet master classes, teach private lessons, perform, and donate instruments to the community.