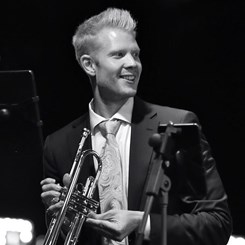 Los Angeles-based performing artist Blake Martin is a trumpeter, producer, educator, and composer/arranger. Whether it be live on stage, in the studio, or in the classroom,"As long as the horn is in my hands, I'm happy."

Blake's passion for the music has lead him to perform with some of the best big bands around, including Bob Mintzer's Big Band, Bob Curnow's LA Big Band, Clare Fisher's Big Band, John Daversa's Big Band, and the Glenn Miller Orchestra. He has also performed as a guest soloist with the Golden State Pops Orchestra. Performing in productions such as Dreamgirls, In the Heights, and The Producers, Blake has performed in Broadway musicals both on land and at sea. You might also catch Blake at the Walt Disney Resort performing with one of many bands around the parks.

Whether it be traveling to give a masterclass or clinic, working with a high school band, coaching combos at the college level, or private lessons in his studio, Blake maintains an active role as a educator, passing on the knowledge that he has gained and continues to seek each and every day.