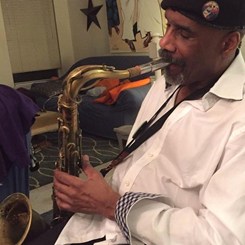 Taken from an article in the Inquirer by Jack Lloyd (Referring to Jazz Meets Hora performance):
THE BOOKER T. QUINTET. The billing for this concert is "Jazz Meets the Hora," so it is clear
that this will not be a routine event, since one does not ordinarily think of Jewish music in the
jazz context. Booker T., however, is no ordinary musician...
For those seeking a different slant on jazz, this concert should prove interesting.”

Quote from Jazz critic Frances Davis: (Referring to Booker’s style)
"The obsessive soul-searching that prods his work suggests affinities with John Coltrane and Albert Ayler.
But unlike too many of the tenor saxophonists who have caught Coltane's and Ayler's fervor, Booker T.
has an earthy sense of humor[...]"

Quote from Robert Christgau from Village Voice (Referring to the a performance):
"Booker T. Williams sent everybody home happy by shrieking, honking and funking to a showboat climax. Stubblefield was so happy that he sashayed and twitched his hips as the rest of the band filed off."

Liner notes by Valerie Wilmer. (Referring to the Dennis Charles Triangle session 4/26/89-4/27/89):
"Named in honor of a revolutionary Black woman from St. Croix, Charles along with his
brother Huss Charles on conga, a sturdy and outstanding Wilber Morris on bass, and a
stalwartly strong but woefully under-recorded Booker T. on tenor sax offer up a program
which manages to emphasize solos without at the same time de-emphasizing the compositions.
The balance is extraordinary and the music invigorating, especially because its rhythmic appeal
is so strong that one quickly drops any prejudices that one has about the lack of swing in avant-
garde jazz."

Biography:
Born on March 3, 1949 in Seattle, Washington, Booker T. Williams, Jr. displayed his artistic talent at
a very early age…. sketching and drawing virtually anything and everything. However at around age 13,
Booker became smitten with the saxophone bug and his artwork became a secondary consideration.
After attending Washington State University and the University of Washington for several years, he set
out for NYC in 1974 to further “chase the music”, with a passion for art still reverberating in his being.
Booker travelled extensively through-out Europe and Japan, honing his sax chops and gigged considerably in and around New York. In addition, Booker has recorded, gigged, and jammed substantially with such notables as Andrew Cyrille, Sonny Stitt, Reggie Workman, Denis Charles, Charles Mingus, Archie Shepp, McCoy Tyner and Sonny Rollins to name a few.

SSDB plays Threadgill's arrangements of his familiar tunes, partly from the Sextet albums.
Unfortunately none of these concerts have been commercially issued.

Jazz Meets Hora
Two sets were performed at the University of Arts, Philadelphia, in 1994 and all music was recorded.
This concert was preceded by a work shop with students earlier the same day and a radio interview by
Ludwig Van Trikt.