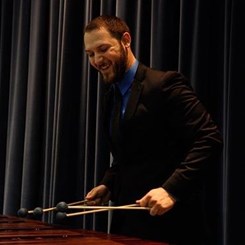 "Do your best. Let that be enough." - Carolyn Bremer

Brandon K Rivera is a multi-instrumentalist and composer, studying and perofmring for over 18 years. He began his musical journey at 10 years old with flute. He absolutely loved flute, but eagerly wanted to learn even more. So in high school, he quickly picked up percussion (marching, classical, jazz). During his junior and senios years, he also began learning guitar and bass, which are both also a part of his musical arsenal.

He started his collegiate career at Fresno City College in Fresno, CA after high school. This is where he began to learn piano, and also where he started to really hone his craft of composing music. It was durong this time that Brandon decided he wanted to pusue a career fusing his two most passionate interests: music and film. In 2012, He transferred to the Bob Cole Conservatiory of Music at California State Univeristy, Long Beach, where he studied music composition and percussion performance. It was while there that Brandon was a part of the first annual PASIC review competition in Fresno, CA, where he and the premier percussion ensemble won 1st place out of all the competing colleges. In his final year at CSULB, the top performing ensemble of the school, Wind Symphony, that he was a part of, was asked to perform by the South Korean government in a wind band festival. They toured the country for a week, having their final performance in Seoul, being the main event for the annual Wind Band Festival.

After graduating college in 2015, Brandon began to chase his dream of writing music for film. During his journey, he had the pleasure of getting to learn from and study from some of the greatest and most notable film composers of all time: Bruce Broughton, Donn Wilkerson, Jim Dooley, Gerard Marino, to name a few. He also began networking and collaborating with different filmmakers on various short films, animations, web series', and feature films. In 2016 he was offered an internship/assistanship with composer Dominic Lewis at Hans Zimmer's studio Remote Control Productions, where he assisted Mr. Lewis on the George Clooney lead feature film "Money Monster". He was also on the music team for Marvel's Inhumans which aired on ABC in 2017. His music has been heard all over the world, in many different films, as well as in television ads and movie trailers.

Brandon to this day is an active film composer that is either always working on a project, or looking for the next one, while still making music for ads/tv/trailers. He also has not lost his passion for playing, as he practices daily, and often still performs with various different groups. He has been teaching since 2008, and absolutely loves sharing his passion with the world, and hopes to inspire others that way he's been inspired by all the teachers in his life. He teaches a couple days a week to keep his passion for teaching and practicing alive. When not partaking in some sort of musical activity, he can be found either eating sushi, watching movies, reading comic books, or watching sports.