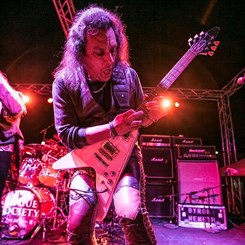 Byron Nemeth, the multi-instrumentalist and hard rock aficionado who has played all over the world and taken part in 6+ album releases to date, knew at just the age of 5 that music was his true calling. Upon first hearing the Beatles, turning his attention to the likes of Randy Rhoads, Michael Schenker, Jimmy Page, and Joe Satriani, as well as jazz and classical talent, Byron pursued his innate calling until the age of 18, when he formed his very first band: Sacred Heart.

Going onto tour with various bands throughout Northeast Ohio during the 80s and 90s, Byron began to explore his personal style, playing with bands like Sacred Heart, Amon-Ra, Prodigy, and Electro-Motive-Force. Releasing the Vision as a 1985 Cassette with Sacred Heart, the Reimagined version was recently made available. Following his first cassette debut, Byron also took part in the release of In the Company of the Gods with Amon Ra in 1992, now also available as a Reimagined version.

Realizing he had a shot at musical fame, following his touring stint, in 1995 Byron began musical education at a university to hone in on artistic skills. Byron studied jazz and classical music at the Cleveland State University, providing him with the talent to easily blend in with a variety of musical genres. Case and point, Byron was shortly thereafter commissioned to perform as first guitar with Richard Henrickson’s orchestrated rock opera, Ozone Hour, at the Cleveland Chamber Orchestra in 1997.

Following his education, in 1999, Byron launched his own solo career with the release of his first album: Byron Nemeth Group. The album laid the groundwork for a progressive, yet melodic style that became the trademark Byron sound for decades to come. His biggest album hits, “Millennium Machine” and “Two Moon Sky,” tapped into a new kind of playfulness that wasn’t, at the time, popular in his style of music. The Reimagined Byron Nemeth Group was recently released in 2018.

Whetting his appetite for songwriting and performance, Byron released 2000, a completely self-product and performed project. With hit singles “Machines of Ice,” “High Speed Life,” and “Summer’s New Day,” Byron began to gain notoriety for his talent. So much so, that in 2001, Byron was asked to perform a featured song “It’s Showtime” on the Japanese Jason Becker Tribute CD: Warmth in the Wilderness. The CD was designed to spread awareness of Jason’s condition of ALS, contracted following his David Lee Roth album recording.

Mastered at Abbey Road Studios in London by Nick Webb, 100 Worlds was Byron’s first statement album that really characterized what he could create with music. With compositions such as “Russian Winter” and “La Luz De Barcelona,” Byron began to marry international textures and flavors in meticulously composed and performed musical pieces. Picking up recognition for his musical presence, Byron was shortly thereafter featured in a chapter “Switching Gears” in the book Working Musicians by New York City ASCAP/DEEMS Taylor award-winning author: Bruce Pollock. 100 Worlds was re-released in 2004 as a CD.

In 2014, Byron released a 4-song studio and video release, featuring Jeremy Colson on drums, Philip Bynoe on Bass from the Steve Vai Band, and Mark Boals on vocals from Yngwie Malmsteen’s early records. Showcasing Byron’s talents as more than just a performer, but one of a lyricist as well as composer. The Reimagined Video Chronicles, originally released as a CD, was re-released this past year.

Released as the Byron Nemeth Group’s fourth overall album, The Force Within that was also mastered at Abbey Road Studios in London by Nick Webb was a tour de force of guitar acrobatics and prog rock sensibilities, comparable to the masters of the genre. As Byron’s first album to feature art from world renowned RUSH artist, Hugh Syme, the album kicks off with “Satrianimal,” a tribute to Joe Satriani. The artwork represents a WWI gas mask as a metaphor for the perils of humanity, with open fields representing the openness of potential. A reflection of Byron’s career, he has been constantly open and available to further his musical passion with the some of the greatest musicians of all-time.

Throughout his career, Byron has opened for notable bands, such as Warrant, Winger, RATT, Y&T, Dream Theater, Rick Emmett from Triumph, Wrathchild America, Vicious Rumors with Vinnie Moore, Helix, Keel with Mark Ferrari, David Chastain, Yes, Black Label Society, Zack Wylde, Richie Kotzen, The Sweet, Lynch Mob, Pat Travers and the list goes on. Byron recalls a mystical moment in his life, when opening for Zack Wylde at the Cleveland Agora. Tired of the “Zack” and “Ozzy” clones, Byron says Zack was floored when he learned an instrumentalist – and an actually unique musical persona – would be opening for him.

Presently based in the Phoenix/Scottsdale, Arizona region, Byron is still recording and playing, scheduling shows throughout the West Coast. Just completing his 2016 7000 mile/20 city tour with Kill Ritual, stretching from California to Ohio, Byron and his band received two endorsements by Blackstar Amps and ESP Guitars along the way.

This past summer, with his Phoenix-based band, Rogue Society, Byron completed and released a 4-song digital EP that spawned a social media hit entitled “English Tea”. He plans to continue composing, performing, and touring for as long as possible.