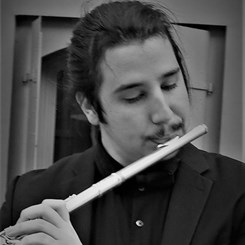 "Paint what you really see, not what you think you ought to see; not the object isolated as in a test tube, but the object enveloped in sunlight and atmosphere, with the blue dome of Heaven reflected in the shadows"

Caleb Hathaway is an adventurous, versatile musician, who is equally comfortable as a performer, teacher, and sound engineer. Recently completing a Bachelor’s of Music at California State University, Sacramento under the mentorship of Laurel Zucker, Caleb is currently honing his skills as a competitive flutist while building a teaching studio, and writing about the intersectional relationship between science, philosophy and music.

Passionate and dedicated to pushing the limits of his craft, Caleb has performed, improvised, arranged and collaborated in Jazz, Persian Folk Music, Reggae, R&B, Gospel, Hip-Hop, & Classical music from the Baroque to the Post-Modern Era.

From 2013 through 2017, Caleb worked as a sound engineer and videographer. This includes acting as Head Sound Engineer for the Sacramento Winter Jazz Festival, The New Millennium Series, Hindustani and Traditional African music performances, as well as the Festival of New American Music,the longest running free new music festival in the United States.

Since 2009, Caleb has been developing his skill as a teacher. This has included instructing musicians of all ages and backgrounds, while focusing on a foundation in the mechanical relationship between air(space), the body, and the mechanism of the instrument. Formerly a teaching assistant to Tatiana Scott at California State University, Caleb encourages students to form a positive relationship with transcription, analysis, interpretation, and expression through increasing awareness of what is happening physically in a performance.