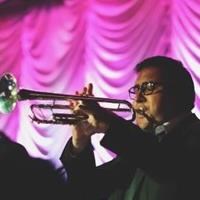 "Obstacles are things you see when you take your eyes off the goal."

Carlos Jimenez is an LA based Musician that loves to play all styles and is extremely passionate about playing music and teaching. He is  versatile in many styles and genres and teaches all ages.  He is a second Generation Bill Adam student that teaches Mr. Adams approach to trumpet playing and also uses the Jimmy Stamp approach. He is currently a student at Azusa Pacific University, where he’s currently working on his bachelors in music education. He went to Alexander Hamilton Senior High School Academy of Music 2009-2013 and then Citrus College 2013-2017. He has played and continues to play with some of LA's finest Latin, Jazz and top 40 groups. As well as with the Santa Monica College Symphony Orchestra. Carlos has had the privilege of Touring with groups such as La Sonora Santanera playing Lead Trumpet with them for 4 years, Melissa Manchester for 3 years. He also has had the privilege to back up Patti Austin, Arturo Sandoval, Jimmy Borges, Bob Mintzer, Terrl Stafford, Ndugu Chancellor,Peter Erskin, Lee Secard, Sal Cracchiolo, Jeff Hamilton, The Gerald Wilson Jazz Orchestra as well as many others. Along the way he's had the privilege of studying with some of the countries top called trumpet players such as Sal Cracchiolo, Gilbert Castellanos, Charley Davis, Robert Slack and most recently Malcolm McNab. He's Performed at many venues and jazz festivals such as The Playboy Jazz Festival at the Hollywood Bowl, The Kodak Theater, The Microsoft Theater, The Central ave Jazz Festival just to name a few.  He Attended Hamilton Senior High School Academy of Music, The Colburn Conservatory, Thelonious Monk Institute of Jazz, Beyond the Bell LAUSD All City Jazz Band,  Tournament Of Roses Parade with the Allcity Honor Marching Band, The Los Angeles Jazz Society Bill Green Mentorship program, and a few others. Over the years Carlos Has developed himself to be an all around trumpet player being able to play all styles of music. Growing up in Los Angeles he's been surrounded by music his whole life. Since I was very young I was always intrigued by sounds and music I never thought I would suddenly have this burning fire for music. I continue to play with many groups and travel extensively with the groups.