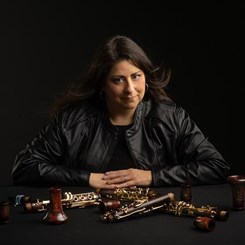 Carrie RavenStem has performed with several orchestras and ensembles including the Louisville Orchestra, Evansville Philharmonic Orchestra, Louisville Chamber Winds, the Louisville Ballet and the Kentucky Opera. Her focus is introducing audiences to living composers and contributing to the future of music by fostering the appreciation of new music.

Ms. RavenStem is co-founder and clarinetist of contemporary music ensemble A/Tonal.   A/Tonal has been performing throughout the Kentuckiana area in venues such as The Kentucky Center, 21c Museum Hotel, Paul W. Ogle Center, and various universities including the University of Louisville, Bellarmine University, and Centre College.  For two years, A/Tonal was featured on WUOL’s The Unheard series, promoting the works of female composers Jennifor Bellor and Alex Shapiro. They recently recorded an arrangement of NPR’s Morning Edition theme which was aired on WYPR 88.1FM in Baltimore, MD and may be heard on Soundcloud.  In the summer of 2016, A/Tonal partnered with Longleash trio as guests of the Loretto Project.  The group’s premiere EP, Starting Point, featuring composers Erich Stem and Daniel Gilliam, was released on April 2, 2017 at A/Tonal’s  Kentucky Center debut. A/Tonal has also had partnership with the Kentucky Governor’s School for the Arts in June 2017, offering a candid Q&A discussion on paving a path in music, as well as a closing performance for the school.  The group completed their residency at the University of Louisville’s School of Music for the 2018-19 school year, with six new works written for them by student composers. This upcoming season A/Tonal will be featured on Louisville Public Media’s New Lens series, held at the 21c Museum in Louisville, as well as a performance at the Speed Museum.  She has been invited to be the guest soloist for the dance company 10 Hairy Legs, and will be performing Steve Reich's New York Counterpoint with them in May 2020 at the Kentucky Center for the Arts.

Carrie has commissioned 5 local Louisville composers to write new pieces for her and A/Tonal; four of these works were premiered at the Kentucky Center for the Arts in May of 2018.  The fifth work, Perceptions of Strife, was written for her by Peter Felice and premiered in 2011.   She was an invited guest artist to the International Clarinet Association’s 2019 ClarinetFest in Knoxville, Tennessee, where she performed the piece.

Carrie is a Backun Performing Artist and plays on Backun MoBa clarinets.

Carrie enjoys sharing her musical life with her husband, composer Erich Stem, as well as with their four children (one plays piano, one plays cello, one plays horn, and one plays with Legos).  She is a secret crocheter and loves to fish, but she’s best-known for her killer omelets.