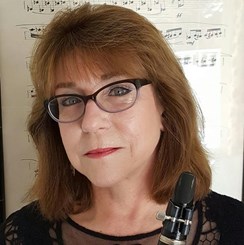 Cathy A. Ogram was born and raised in Youngstown, Ohio, a graduate of Youngstown State University's prestigious Dana School of Music.

Cathy was a career clarinetist with the U.S. Army Field Band, in Washington, the nation's premiere touring concert band.  During her time with the Army Field Band, she was a Soloist on several occasions, Training NCO, Clinician, member of the Woodwind Quintet, frequent performer on the chamber music series, founder and NCOIC of the Educational Outreach Ensemble "The Woodwind Ambassadors."  She also  participated in the International Clarinet Association’s Orchestral Competition as a 4-time semi-finalist, and  2nd place winner, in her spare time.

During the summers of 2007-2009, Ms Ogram served as the Clarinet Instructor and Chamber Music Coach for the Army School of Music, located at the Joint Expeditionary Force Base, Ft Story, training military clarinetists to be awarded their occupational specialties.

Ms Ogram performs with the Tidewater Winds, the Virginia Wind Symphony, the Williamsburg Symphonia, Omega Studio's Washington Winds and serves as the Virginia State Chair for the International Clarinet Association.