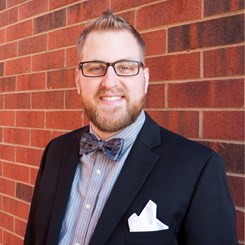 Chad O’Brien is a trombonist, educator, and composer/arranger based in Louisville, Kentucky. In addition to an active freelance performance career, he currently serves as faculty at the University of Louisville and South Oldham High School and maintains a private studio at the Music and Arts Louisville location. He graduated from the University of Louisville with Masters of Music in Trombone and Jazz Performance in 2019; his undergraduate studies earned him a Bachelor of Music in Jazz Studies (Trombone) and Music Education from the Eastman School of Music in 2012.

As an educator, Chad studied with Christopher Azzara, Richard Grunow, and Kathy Liperote. He teaches private students on trombone, euphonium, trumpet, tuba, and in the fields of jazz, music theory, and music education. Additionally, he is an avid participant in the education community; he has presented clinics at the Illinois Music Educators Conference (IMEC), the Indiana Music Educators Conference (IMEA), and the National Association for Music Education (NAfME) In-Service Conference; he has also written articles for several NAfME publications. Before moving to Louisville, Chad formerly held positions as the Band Instructor at Rockland Country Day School in Congers, New York and Adjunct Brass Faculty at the Francis W Parker School in Chicago, IL.

In his 19 years of applied study on trombone, Chad has studied privately with Brett Shuster, Mark Kellogg, Hal Crook, Andy Rosza, and others. Throughout his already extensive performance career, Chad has played with ensembles ranging from the Tommy Dorsey Orchestra to the Louisville Orchestra, from the Dave Rivello Ensemble to the internationally renowned rock band Earth, Wind, and Fire.