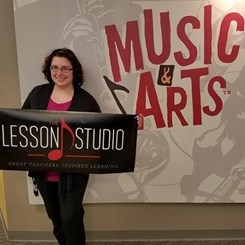 "Hello! I'm Charise, and I have a passion for music and languages!"

Charise received her Associate of the Arts degree from Manchester Community College in 2011 and recently graduated from Central Connecticut State University, class of 2016. She received a double-Bachelor of the Arts in General Music and Spanish and also has a minor in American Sign Language. Her primary instrument is the viola, secondary in cello, piano, and voice. Studio teachers have been Karin Fagerburg for Viola, Carlos Boltes for Viola, Julie Ribchinsky for Cello.

She participated for five years in the Summer Place Players theatrical program under the direction of Bob Davis from 2003-2008 and was in the productions of Footloose, Once Upon a Time, Peter Pan, Little Shop of Horrors, and High School Musical. She also sang with the Hartford Chorals as a Soprano Intern from 2007-2011 under the direction of Richard Coffee.

Upon starting at MCC, she sung with the Madrigal Choir under the direction of Christopher Hartt and Jolie Rock Brown. She also participated in the Chamber Ensemble under the direction of Dr. Debrah Simmons. Continuing to pursue her music degree in music at CCSU, she was a student of Karin Fagerburg of the Hartford Symphony Orchestra and particpated in the CCSU's Symponetta under the direction of Julie Ribchinsky. During her time at CCSU she began a second major in the Modern Language department for a B.A. in Spanish, as well as a minor in American Sign Language. She has participated on multiple Study Abroad programs to Spain and Peru. She has studied in La Universidad de Salamanca in Spain and recently visited one famous sight of the world, Machu Picchu.