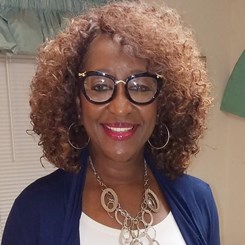 Cheryl Morgan Young is blessed of God to be one of His servants in the Ministry of Music. She strives to share God’s gift of music and to encourage others to expand their talents in the ministry of music.

She is the only daughter of Doctors Joseph and Evelyn Morgan and was practically born a musician. The Lord blessed her to play piano at home at the age of three and one-half years old and then later began playing in Jerusalem M. B. Church as the Sunday School musician at ten years old. As a teenager, she expanded her responsibilities to the Youth and Young Adult Concert Choir as one of the musicians. As an adult, her responsibilities expanded more as one of the musicians for the Sanctuary Choir and the Mass Choir at Jerusalem M. B. Church.

As a child being reared in a minister’s and a musician’s home, she came in contact with many musicians and was constantly exposed to the field of music through her mother’s connections and efforts. She grew up in the Morgan’s Studio of Musicianship and later began teaching in the studio until high school graduation. She was always active in all music activities from grade school through college and beyond.

Among her early music activities, she was the organist for the State Congress of Missouri for eight years serving alongside her mother who was Music Director and Pianist. She was the pianist for the Girls Glee Club at Lutheran North High School as well as pianist for the State Youth Fellowship. Cheryl worked along with her mother in the Antioch District Music Department for many years and later became the Antioch District Director of Music to which she was overseer and coordinator for the Pre-Congress Musicals and Youth Rally for four years. She sang with the University of Missouri – St. Louis, University Chorus and traveled with them twice all over Europe in a singing tour – England, Germany, Austria, Switzerland, Holland, Luxembourg, Italy and many more.

She has participated with the National Congress Musicals when it was here in early 1980’s and sang with the Legend Singers in the early 1990’s. She has participated in several Winter Music Readings with the University of Missouri – Kansas City in association with the Wingert-Jones Music Store. She also worked with Dr. Doris Wilson to further her understanding of the Ministry of Music in the Black Baptist Churches. She assisted Sis. Shirley Hairston in her solo concerts and with Rev. Willie Kilpatrick with a gospel concert both held at the Hopewell M. B. Church. She has worked with gospel music greats like Rev. Jack McGill and Dr. Johnnie Lou Howard Franklin Brown and Dr. Doris Wilson. She has sung with two Congress Choirs when held in St. Louis, MO. She was instrumental in hosting the First (ever) Week-long Antioch District Youth Rally where Jerusalem M. B. Church hosted over 350 youth and adults in our Annual Session. She was the Youth Director of the Youth Fellowship for the Antioch District Association. She sings with Progressive Mass Choir, under the leadership of Dr. Erral Wayne Evans and was blessed to travel to Luneberg, Germany last summer. She now has a new found family in Germany. She has been the Director of Music – Lead Musician (19+ years) and is currently the Lead Musician for the Jerusalem M. B. Church to which multiple choirs and musicians are participants in the music department.

Cheryl holds a B. A. in Mathematics with minors in Philosophy, Statistics and Computer Science. She also holds a Master’s in Information Management with major emphasis in Artificial Intelligence in Manufacturing. She is a certified Knowledge Engineer and has several technical certifications and extensive training in the field of Computer Science and Large Systems Implementation. She traveled for the nine plus years implementing SAP for large commercial and government clients across the U.S., Canada and in Korea. She is currently working towards a Doctorate of Theology in Ministry.

Feel free to contact the Bridgeton Music & Arts to set up a first lesson with Ms. Cheryl!