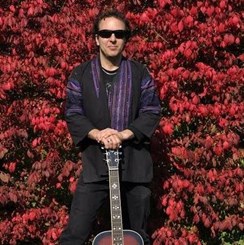 Chris began studying the guitar at the age of 12 and was performing and teachingby the time he was 17. He studied bluegrass flat picking on acoustic guitar at 18,and learned to play many styles including blues, rock, heavy metal, and someclassical. At 21 he began to play the Hawaiian steel guitar, and at 24 branched outby picking up the Colombian tiple, Irish bouzouki, Turkish saz, Arabic oud,studying classical Arabic music for three years with a master from Iraq. He laterpicked up the Portugese guitar, Turkish yali tambur, and mandolin, and steeldrum.

He specializes in Caribbean music playing both reggae and calypso andtaught himself the steel drum. In his late 20s he began studying the Japaneseshakuhachi flute and it took over his musical life. Since that time it has been hismain instrument of focus and he is now highly classically trained on it playing bothBuddhist meditation and classical music, as well as folk songs. He also studiedHawaiian music in Hawaii and at home in NY, and is steeped in American rootsmusic-blues, country, gospel, and bluegrass. He offers shows in all these styles aswell shows of popular cover songs from the 40s through the 90s. He has played inmany original bands since the age of 14 and has been composing his own musicsince that time.

In addition to his musical studies he began travelling the world tostudy traditional music at the source and to learn more about the world we livein. His travels have taken him to Tibet (twice), Egypt, Thailand, Cambodia, Laos,Japan (many times), China (twice), Holland, Mexico, Belize, Guatemala, and allover America and Canada. He studied shakuhachi in Japan with one of the erasgreatest masters, and he studied oud in Egypt. He has performed at the NationalCherry Blossom Festival, the United Nations, the Philadelphia Museum of Art, theNew York and Brooklyn Botanical Gardens, as well as countless libraries, artscouncils, and schools.