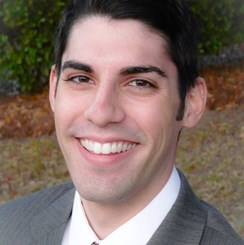 Christopher Longo is an operatic tenor, violinist, pianist, and songwriter from Tampa, Florida. Christopher trained as a classical violinist, and pursued a violin performance degree at Florida State University until he was encouraged by his then-voice teacher to switch to the voice program. He holds a Bachelor of Music degree in Vocal Performance from FSU, and a Master of Music degree in Voice Performance and Literature from the Eastman School of Music. As an orchestra member, he performed with the University Philharmonic at FSU, and the Patel Conservatory Youth Symphony in Tampa.

This past summer, Christopher performed the Prince in Opera Steamboat's cover concert of Rusalka with orchestra. Earlier in the 2018-19 season, Longo originated the role of the Fisherman in Opera Tampa's world-premiere of Anton Coppola’s Lady Swanwhite. He debuted with the company in 2018 as the Defendant in Gilbert & Sullivan’s Trial By Jury. Earlier that year, Christopher made his company debut as Alfredo in St Petersburg Opera's cover matinee performance of Verdi's La Traviata. In 2017, he was an Apprentice Artist with Sarasota Opera. He was invited back the following season to cover Giuseppe in La Traviata. He made his Central City Opera debut as Alfredo in La Traviata as a member of the prestigious Bonfils-Stanton Apprentice Artist Training Program in 2015.

Other operatic credits include Chevalier de la Force in Poulenc’s The Dialogues of the Carmelites, George in Rorem’s Our Town, Padre in Wasserman’s Man of La Mancha, Frederick in G&S's Pirates of Penzance, Herr Vogelsang in Mozart's Der Schauspieldirektor, Orphée in Offenbach's Orphée aux enfers, Nemorino in Donizetti's L'elisir d'amore, Les Fils in Poulenc's Les mamelles de Tirésias, and Bardolfo in Verdi's Falstaf . Along with performing, Christopher offers lessons in voice, violin, viola, and piano for all levels and ages at Music and Arts’ Princeton, and Manalapan locations.