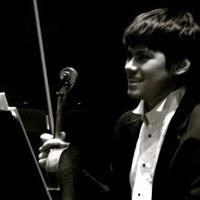 Christopher Thurstone began playing the violin at the age of ten. At the age of thirteen he won the first place prize in the NCMTA junior division by performing Mozart’s Violin Concerto No. 3.

Chris has continued to pursue music throughout his education and performed as a soloist with his high school orchestra and the Duke University String School Youth Symphony in 2006. He has performed in numerous summer music festivals including Interlochen, Hot Springs Music Festival, Brevard Music Center, International Violin Symposium at University of North Carolina at Chapel Hill, and the International Music Institute and Festival in Maryland. Chris has also acted as a counselor and soloist at IMIF, DUSS Summer Camp, and more recently at the ACT Music Performance Program in Thessaloniki, Greece.

In 2010, Chris was offered positions in the Durham and Fayetteville Symphony Orchestras and has performed with the China National Orchestra, North Carolina International Orchestra, and Georgia Symphony Orchestra. He has also performed around the NC Triad and Atlanta areas in musicals, operas, and church performances. In 2020 he was one of three string finalists for the Brumby concerto competition, however the final competition was cancelled due to the outbreak of covid-19.

Chris is also a promoter of new music and plays regularly for his colleagues’ compositions. In addition to music, Chris’ hobbies include tennis, golf, and motorcycling across the country. Christopher received a bachelor’s degree in violin performance from University of North Carolina at Greensboro and is currently studying a master’s degree in orchestral performance at Georgia State University.