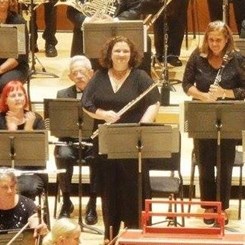 Music has given me so much purpose, meaning, and joy through all the phases of my life. It’s my sincerest wish that all my students experience the same abiding love and enthusiasm for music that they will carry with them for life.

Tisa Schuurman (pronounced “TEE-suh SKER-muhn”) has played professionally in the Atlanta area for many years in styles as varied as orchestral, wind band, musical theater and jazz-funk fusion.  She appeared as the featured soloist on Alberto Ginastera’s Impresiones de la Puna with members of the Atlanta Community Symphony Orchestra and Atlanta Symphony twice in 2018.  Mrs Schuurman reprised her role as soloist on the work with members of the Atlanta Symphony Orchestra under the direction of Maestro Juan Ramirez at a concert celebrating the International Day of the Migrant at Atlanta City Hall on December 13, 2019.

Mrs Schuurman is a graduate of the Hugh Hodgson School of Music at the University of Georgia, where she earned a bachelor’s degree in music performance, studying with Dr Ronald Waln. Other teachers include internationally renowned performer and recording artist, Amy Porter; and graduate-level studies with Paul Brittan, formerly of the Atlanta Symphony Orchestra.

Currently, Mrs Schuurman enjoys a busy concert schedule with various groups around the state.  Among these is the Atlanta Community Symphony Orchestra, a cornerstone of the Atlanta music community since 1958, where she has been principal flute for many years. She has also served as principal flute of the Gwinnet Symphony Wind Orchestra since its founding in 2015.  In addition to performing, Mrs Schuurman is a lessons teacher with a growing studio, and a busy clinician at middle schools and high schools in Cobb and Cherokee counties.