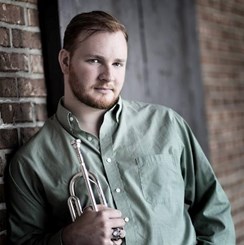 "The very essence of leadership is that you have to have vision.  You can't blow an uncertain trumpet."

An avid musician since his elementary school days, he began his journey in the Orchard Park Central School District and participated in numerous county and statewide music competitions hosted by the Erie County Music Educators Association (ECMEA) and the New York State School Music Association (NYSSMA).  His proficiency on the trumpet lead him to perform with several of the county and state’s best musicians at concerts hosted by these organizations.  In 2010, Cyril graduated from Ithaca College as a member of the Pi Kappa Lambda Music Honors Society.  During his time at IC, he served as principal trumpet of the College’s Wind Ensemble and Symphony and Chamber Orchestras, and performed as a guest artist and soloist for the Cornell University Wind Symphony during a two week-long performance tour in Costa Rica.  Shortly thereafter, he became a finalist for the 2011 YouTube Symphony Orchestra – a selected pool of auditionees from around the world.

He continued his studies at Rutgers University where, before he earned his master’s degree in 2013, he served as the Eb soprano cornetist and a soloist for the Rutgers University Brass Band.  During that time, he was also awarded the Philip Smith Scholarship Chair for the Imperial Brass Band and was welcomed primarily as the ensemble’s principle solo cornetist, followed by his instatement as Eb soprano cornetist.  Since then, he has been working toward his doctorate and has been featured as a performer and soloist for several organizations such as the Ars Musica Chamber Orchestra, Sinfonietta Nova Orchestra, and the Baroque Orchestra of New Jersey.

As a pedagogue, Cyril has focused on brass instruction for elementary through college bound students, teaching in school districts stretching from New York to New Jersey and Delaware.  He served as a private trumpet instructor through the Mason Gross Center for the Arts Extension Division at Rutgers University, and was a guest lecturer and professor in residence for the University’s Summer Band Program, of which the following was noted:

“Seeing Cyril work with the students was an absolute joy to see.  Mr. Bodnar’s ability to motivate, inspire, and teach students resulted in their ultimate trust and respect.  This produced outstanding performances at the end of the camp.  I credit him immensely for the success of the camp.”

Over the years, Cyril has studied and performed with multiple influential trumpeters, such as Kim Dunnick, Frank Campos, Chris Martin, David Krauss, Matthew Muckey, Kenneth DeCarlo, and Phil Smith.  With a wealth of knowledge at his fingertips, he has crafted a student-centric philosophy of music education that blends meeting his student’s needs and concerns during lesson time with teaching material in an enriching, positive, and fun way.

“Growing up in Orchard Park, I’m very familiar with the local school districts and their involvement with the arts.  If you’re an elementary, middle, or high school student (or beyond!), I would be happy to offer what knowledge I’ve gathered over the years to take your performing to the next level;  whether you’re a student who’s just starting out on your first instrument, looking for a few extra lessons to improve your playing, or preparing for solo festivals or college auditions.  I look forward to meeting you and creating music together!”