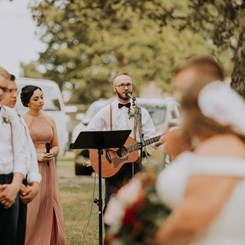 I started working at Music and Arts, August of 2017.

I'm 22 years old, and I grew up in North Bay, NY. I'd say I started my musical adventure in elementary school, singing in the school choir and playing an upright bass that was WAY too big for me, so I ended up dropping that once I moved to middle school. I received a cheap Alvarez acoustic guitar for a birthday one year, that ended up spending its days sitting in the back of my closet. I got an Fender Electric Acoustic guitar in 6th grade, and that's when I started actually teaching myself and playing more.

It wasn't really until my freshman year of high school when I started playing and singing for my youth group and church band that I got really into music. I was practicing for hours a day, taking every opportunity I could, dying to get better. I took as many music classes in high school as I could; theory, chorus, band, etc. I participated in the musicals, NYSSMA, select vocal ensembles, and did plenty of solo and band gigs outside of school.

2014, I went to a bible school in the Adirondacks called Word of Life Bible Institute and travelled with my band every weekend all over the Northeast, playing and singing in schools, churches, concert halls, and similar venues. Went on a few 2-3 week tours, playing for a big Christmas production, and promotional shows for the school. During the summers, I played for a camp called Word of Life Island, doing daily music, and a couple big concerts we travelled for, one being at Six Flags in Darien Lake. I'd say these two years were the majority of my real performance experience, but they were incredible and vision shaping for me.

I now live on Long Island, playing at my church every week and playing gigs around Long Island whenever I can.
I manage the Music & Arts here in Commack which opened January 25th, 2019.

My primary position in most musical roles I play are as a singer and rhythm guitarist, but in the past couple of years I've been attempted to pick up lead guitar, bass, piano, and drums, as well as learning how to write, arrange, and record music.

My goal for the next couple of years is to form a band to play gigs with and get more involved in music production and recording music for others.

Feel welcome to stop in to say hi!