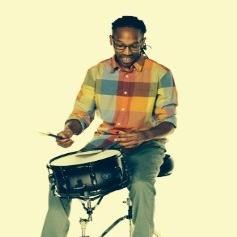 Daleton Lee was raised under a musical umbrella. It all started because of his father's influence of gospel music, stage band. and marching band music. Daleton soon was enrolled to all the popular music magnets and there he began his musical journey. By the age of 14 Dale was enrolled at the High School for the performing and visual Arts. This school gave him the necessary skills to be able to adapt to any circumstance in the arts field, things like playing along with dancers and performing alongside theatre majors in big show cases.

His passion for teaching speaks volumes. He applies the same tools the he has learned as a youth. "Drumming is a very hands on instrument it involves breaking down complex rhythms, playing in different time signatures, learning to play in time with a metronome, playing with a groove, playing many different styles of drumming."

Daleton currently is a professional jazz drummer in the city of Houston and has been since the age of eighteen. He currently plays for Yelba and Latin Fire and Yelba's Variety Band. Plus, he performs with just about every jazz "cat" in town, including his own group "The Formation" which is currently under construction.