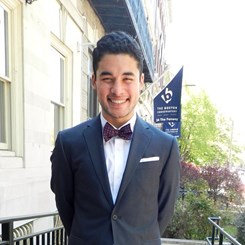 where he teaches concert band, jazz band, choir, drumline and general music in a

Daniel graduated from Berklee College of Music in 2016 with a B.M. in Music

Education. While at Berklee, he worked as a studio musician where he appeared on

the radio, film scores, and several albums for various artists. He has also performed

in places such as the Upper Valley Music Festival, and Boston Symphony Hall with

Before obtaining his bachelor’s degree, Daniel had the distinction of being the sole

district junior, senior, and all-state conferences as part of the Massachusetts Music

Educators Association (MMEA) in 2016. This position gave Daniel the opportunity

to serve students inside and outside of the classroom.

Here at Music & Arts, students can expect to learn a variety of different styles of

their own musical goals. Through learning proper technique, coordination, and

application, students will be challenged and encouraged to improve their listening

B.M. in Music Education from Berklee College of Music