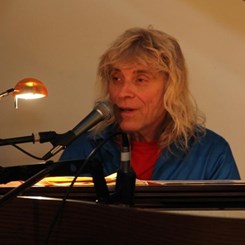 Defining Dan Dobek's music is a little like trying to explain electricity. "Well, it's the invisible force, it seems to come from some mysterious place and it sort of energizes everything, and it's very powerful, one might say of both, and be right." But beneath the awkward search for words that work is a deeper force, the source of inspiration for Dan's profound talents as a composer and performer of dazzlingly beautiful instrumental music.

The music Dan creates conveys a sense of spiritual commitment and dedication - perhaps more remarkable since most of his work is instrumental. It might be called Christian Jazz, and even people with no religious frame of reference have been able to recognize that this is music with a most unusual and powerful energy.

Dan's career began at a very early age. By 10, he took top honors in a national contest for performance on the piano accordion, As he matured, he moved to other instruments, first to piano and then to jazz organ. After a brief stint at Berklee School of Music, Dan decided to investigate the piano thoroughly, searching for the broadest range of its possibilities. In 1990, with the release of his acclaimed CD Jazz For My Father, things began to gel. "That's when I realized that I was a writer, he recalls. "I started to view myself as a composer and not just a player. I feel that inspiration from something in my spiritual life and put that feeling to music.

Now, four recordings later and with another about to be released, Dan Dobek is sharing his love of music with his listeners. "That's the heart motivation and the musical motivation of my writing, he says. And it's that heart and music that reaches beyond perspectives, beyond personality, beyond time, to inspire us all.