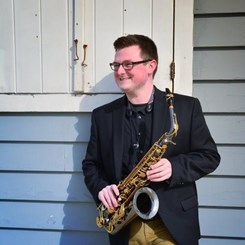 Daniel Martin Minogue is a composer of classical and electronic music based out of West Hartford, Connecticut.  Inspired by many genres, Daniel endeavors to write music that is atmospheric and ethereal but is still always searching for that tactile groove.

Originally from Patchogue, New York, Daniel received his B.A. in Music from Stony Brook University where he studied composition with Phil Salathé.  Daniel is currently pursuing his Masters of Music in Composition at The Hartt School of Music, Dance, & Theater where he is currently holds the position as the Electronic Music Fellow.  He has had the privilege to study with David Macbride, Robert Carl, and presently with Ken Steen.

Daniel has had a number of his works and installations performed at the Stony Brook Composers Concert Series, Sonic Spring(curated by Daria Semegen), Hartt Public Works, the Hartt Electronic Music Concert Series, the Hartt Dance Division, and the Long Island Maker Fest.  In addition, Daniel had the opportunity to write for immensely talented musicians and performers such as saxophonists Scott Litroff, Carrie Koffman, vocalist and composer Gilda Lyons, the Castangia Trio, director and actor Terry Layman, and bassist Grant Blaschka.